As a physician, fitness expert, humanitarian and one-time reality show star of ABC’s The Bachelor: Officer and a Gentleman; Dr. Andy Baldwin has a multitude of interests and expertise, and has a starring role in health and fitness. Dr. Baldwin is passionate about making America a healthier country and the world a better place. Take a peek at what makes one of America’s most passionate doctor’s tick. 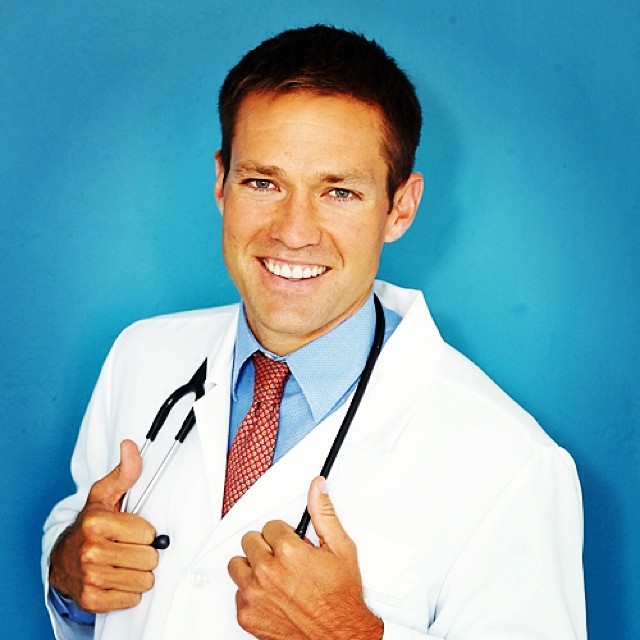 Q. Barbara Ficarra: Your acts of kindness and empathy for people are evident, your charitable and humanitarian efforts have spanned the globe from Laos to Kenya; what drives your passion for helping others?

A. Dr. Andy Baldwin: My parents taught me at a young age to always ask people “how can I help?” Through their excellent mentorship I have learned the importance of these four simple words. I believe helping others is the greatest thing we can do while on this Earth. It is what makes me happy. Experiences with the Navy have taken me to dozens of countries in the past decade, providing me with an intense perspective into the health disparities of the developing world. With no access to clean water, lack of perinatal care, and crippling infections in these regions, simply getting to age 5 is a victory. Here in the USA, we’re blessed to have the basics like clean water, but our health and happiness is often held back by lack of exercise and unhealthy food choices. As a doctor, I see too much illness caused by obesity and what drives me more than anything is to turn that around and help these families get healthier. I love taking my patients to the grocery store or to do fun fitness activities to get them started on an exercise routine. That’s what fuels my passion for my work – seeing them adopt these better habits and get healthier.

Q. Barbara Ficarra: What advice would you give to high school and college students about following their passions?

A. Dr. Andy Baldwin: As you set sail into the sea of life, don’t attempt to have your exact course established, but have a good compass. Take note of what makes you happy, and what doesn’t. If you find yourself doing something you are not passionate about, set a new course. Be open to opportunity; don’t be afraid to take risks. Life is too short to live with regrets.

Q. Barbara Ficarra: Fitness is extremely important to you. From completing your first triathlon in 2001 to running marathons; and climbing mountains; has fitness always been part of your lifestyle growing up as a child or did you become passionate about fitness later on?

A. Dr. Andy Baldwin: Fitness has truly shaped who I am as a person. Following my parents lead, as a child I developed fitness as a habit and experienced the benefits of being active every day. As a kid I was always outside- hiking, biking, playing tag, or capture the flag. This developed into playing most sports throughout grade school and excelling at swimming and running as a high school and collegiate athlete. Sports taught me teamwork, social skills, discipline and good time management.

Q. Barbara Ficarra: As an advocate for the First Lady’s Let’s Move Campaign, in your opinion, what suggestions would you offer people to become more active? How can people make physical activity part of their lifestyle?

A. Dr. Andy Baldwin: When I worked with the U.S. Surgeon General, Admiral Galson, on his Healthy Youth for a Healthy Future initiative, what I loved most was his insistence on traveling to the field, and actually exercising and teaching students why physical activity is so important. This idea of getting out in front of the kids and interacting directly with students remains a priority of mine as an advocate for the First Lady’s Let’s Move Campaign. In order for people to make physical activity a habit they need to make the mental shift in their mind giving it a higher priority level. Educating them on why activity is so important is key. As is the need for the physical activity to be fun! At the end of the day, each person has different reasons that can be harnessed to motivate them to make activity a habit. Keying in on those reasons and motivating them is what I love to do as a mentor, physician, and coach.

Q. Barbara Ficarra: How important is physical fitness programs for children in schools?

A. Dr. Andy Baldwin: Physical activity has  been shown to improve mental health, confidence, and improve scholastic performance. The fact that P.E. has been eliminated from schools is a travesty. Kids need an outlet during the day for physical activity and fun.

Q. Barbara Ficarra: In your opinion, what are the most significant stories about health today?

A. Dr. Andy Baldwin: Hands down, the most pressing health issue for the United States is the number of overweight and obese in our country. The alarming part is that chronic diseases (chronic diseases include heart disease, cancer, stroke, diabetes,  arthritis and obesity) can lead to high blood pressure, diabetes, heart disease, cancer, and stroke, and are responsible for 7 out of 10 deaths in the U.S. last year. The more alarming fact is that these diseases are preventable. 133 million Americans live with at least one chronic illness, and more than 75% of health care costs are due to chronic conditions.

Q. Barbara Ficarra: What’s on the horizon for your next fitness adventure?

A. Dr. Andy Baldwin: I am running the NYC Marathon on November 3rd.  It will be my 5th time doing the race, and this year I am running for a very important cause.  November is Diabetes Awareness Month, and by running I want people to know that physical activity is the best way to prevent diabetes. Close to 26 million Americans have Diabetes, impeding their ability to process their blood sugar, which can lead to cardiovascular disease and stroke and diabetes is the leading cause of kidney failure and blindness.  Nutrisystem is supporting me in this effort through their diabetic education program and diabetic friendly low glycemic index meal plans.   As a family physician, the importance of consistent daily exercise paired with a structured, smart, nutrition plan is paramount to prevent diabetes and for diabetics to keep their blood sugar numbers until control.
—

Pursue your passions, do what makes you happy, have no regrets and don’t be afraid to take risks.

Inspired by his parents, Dr. Andy Baldwin keeps close the four simple words his parents taught him, “How can I help?” Striving to make the world a better place, Dr. Baldwin’s passion is insurmountable. His dedication and commitment are commendable. While he may have captured the hearts of many during his stint in the spotlight on Prime Time, one thing is for sure, he has captured the world’s heart because nothing is better than caring and helping others.

I have no doubt Dr. Baldwin will be victorious in the New York City Marathon. He’s running his fifth straight ING New York City Marathon to not only support diabetes awareness, but to support Camp Interactive, a New York City-based not-for-profit organization that brings technology education infused with leadership skills to inner-city youth. TeamInteractive 2013 NYC Marathon fundraiser information may be found here.

What fuels your passion? What makes you happy? How do you help others? Please share your insightful thoughts in the comment section below. As always, thank you for your valuable time.

Up next…Part 2…Find out where Dr. Andy Baldwin would like to be in five years, his favorite quote, and if he could have lunch with anyone in the world, find out who he would choose.

Dr. Baldwin is Senior Medical Officer on the Amphibious Assault Ship, USS Makin Island in San Diego, CA.  Previously, Baldwin served as a spokesperson for Navy medicine at the Navy’s Bureau of Medicine and Surgery in Washington, D.C. where he also assisted the U.S. Surgeon General with Healthy-Youth-for-a-Healthy-Future.  Baldwin is an advocate for the “Let’s Move” Campaign headed by First Lady, Michelle Obama, and works with Nutrisystem with its initiatives to combat obesity and diabetes.

Baldwin completed his internship in General Surgery before being deployed to the Philippines, Thailand, Laos, Singapore, Cambodia, and the Republic of Palau as an Undersea Medical Officer on diving, recovery and humanitarian missions. Dr. Baldwin has been honored on Washington D.C.’s Most Influential People under 40 list and Outside Magazine’s Top 100 Influential People of the World list for his humanitarian work treating over 600 Laotians in remote villages.

Baldwin completed his first triathlon in 2001 with Team-in-Training, combining sport and charity for the first time, and finished atop the podium. In 2002 Baldwin completed the Ironman Triathlon World Championships, is now an eight-time Ironman finisher, five of them being the arduous Ironman World Championships in Kona, Hawaii, was named to the All-Navy Triathlon Team five times, is a three-time U.S.A. Triathlon All-American, and competed internationally in numerous Ironman events.

Baldwin appears frequently in media including Men’s Health, Runner’s World, Triathlete and GQ Magazines, Good Morning America, CNN, The View, FOX News, ABC’s Extreme Makeover Home Edition, NBC and other television, and was the star of ABC’s hit show, “The Bachelor: An Officer and a Gentleman,” and guest contributor to Healthin30.com.

Dr. Baldwin is founder of the charity Got Your Back Network, a foundation that helps families of fallen soldiers.