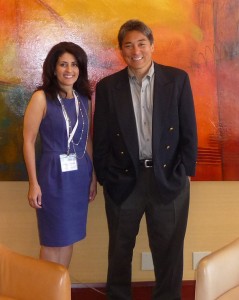 Guy Kawasaki referred to himself as a “Bozo” during his keynote address at the Health Tech Next Generation Conference this month in San Francisco.

Don’t Let the Bozos Grind You Down

One important lesson which appears at the end of Guy Kawasaki’s keynote presentation is when he talks about powerful people reluctant to simply believe and resist the opportunity to engage.

A few examples include the following:

“I think there is a world market for maybe five computers,” that’s what Thomas Watson chairman of IBM said in 1943, proclaimed Kawasaki during his Power Point presentation.  “The telephone has too many shortcomings to be seriously considered as a means of communication.  The device is inherently of no value to us,” that’s from a Western Union internal memo, 1876, chimed Kawasaki.  “There’s no reason why anyone would want a computer in their home,” words of Ken Olsen, Founder, Digital Equipment Corp., 1977.”  Surprisingly, Guy Kawasaki, Bozo (his words, not mine,) sheepishly said (as if he’s still embarrassed), “It’s too far to drive, and I don’t see how it can be a business.”  He proceeded to explain how he didn’t think Yahoo was going to be a business. He questioned the business model and passed on the position as CEO of Yahoo.  The message for the audience, “Don’t be a Bozo,” and “Don’t let the Bozos grind you down.”

Enough said, and in all fairness to Guy, he is far from a Bozo.

He’s charming, endearing, engaging, and funny.  He offers simple business advice to help others succeed.  Here are the topics covered his keynote address.

I had the pleasure of interviewing Guy Kawasaki, and I asked him what suggestions he has for companies to excel at innovation.  “The key is to have the right perspective, and the right perspective means to jump curves,” he said, “not just doing things ten percent better, but you need to get to a better curve.”  For example, he explains innovations that have jumped the curve include going from “the daisy wheel printer to the laser printer, telegraph to telephone, and ice factory to refrigerator company, those kind of jump curves,” he said.

The future trend for innovation is that “everything is going to get better, faster and cheaper,” but that’s not a curve jumper; almost by definition if it’s a curve jumper, you and I can’t sit here to discuss,” he said.  “We don’t know what it’s going to be.”

Three tips for companies to succeed

Three tips companies should be doing to succeed are:

“First, jumping to the next curve, not simply be doing things ten percent better, second, they should never ask their customers to do something they would not do and third, they should provide employees what   Daniel Pink calls a MAP; which is opportunity to master new skills while working autonomously towards a higher purpose.”

To me “Enchantment” means attracting and fostering relationships, listening and understanding the needs of others.  It means collaborating and communicating, stepping outside your comfort zone and passionately and purposefully embracing work and life.

Now, I wonder if Mr. Kawasaki will follow me back on Twitter and join me on Google Plus.

Join me on Linkedin

What does “Enchantment” mean to you?

—
[I moderated a social media panel at the Health Tech Next Generation Conference.  Part 2 will delve into social media and other highlights of the conference.]

Guy Kawasaki is the co-founder of Alltop.com, an “online magazine rack” of popular topics on the web, and a founding partner at Garage Technology Ventures. Previously, he was the chief evangelist of Apple. Kawasaki is the author of ten books including Enchantment, Reality Check, The Art of the Start, Rules for Revolutionaries, How to Drive Your Competition Crazy, Selling the Dream, and The Macintosh Way. Kawasaki has a BA from Stanford University and an MBA from UCLA as well as an honorary doctorate from Babson College.