Part 1 of How to be Wildly Popular focused on where I found inspiration for writing this healthy living post.

So, you want to be popular? 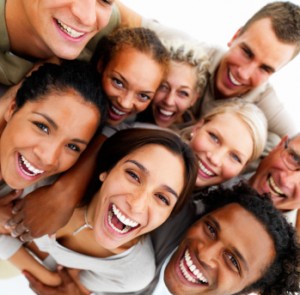 Be popular and happy within your own group of friends.

Who doesn’t (okay, there may be some people who really have no interest in being popular–that’s cool.  To each his own).

But, for those of you who have a little interest, I’ve put together three secrets that may help. (Okay, these aren’t really secrets; you’ve heard them before. Let’s say that these are little friendly reminders.)

Before I write the “list” of three friendly reminders, first think about what attracts you to people.

What is it that makes some people so desirable?  So popular?

I don’t mean popular in the sense of being famous, being an Academy Award winner or an Oscar winner, or being Oprah Winfrey or Rachael Ray, Julia Roberts, Derek Jeter, Steve Jobs or Bill Gates (or whoever).

I mean popular as being successful, (but not in terms of money either) but popular with people surrounding you because you’re likable.

Do you love what you do? Do people love being around you? Do you make them laugh? Do you attract people into your circles? Success is about being liked. People like surrounding themselves with people they like. People will make you popular.

When giving the commencement speech to Barnard College, 2010, Meryl Streep had this to say:

“I know I was invited here because of that. How famous I am. I how many awards I’ve won and while I am overwhelmingly proud of the work that, believe me, I did not do on my own. I can assure that awards have very little bearing on my own personal happiness — my own sense of well-being and purpose in the world. That comes from studying the world feelingly, with empathy in my work. It comes from staying alert and alive and involved in the lives of the people that I love and the people in the wider world who need my help. No matter what you see me or hear me saying when I’m on your TV holding a statuette spewing, that’s acting.”

Being popular isn’t about money or fame, it’s simply about being liked. It’s about attitude and personality and it’s about how others perceive you. It’s about happiness, a sense of well-being, purpose and passion.

Meryl Streep is wildly popular, famous and successful; but as mentioned in her speech, her own personal happiness doesn’t come from the number of awards, it comes from her “own sense of well-being and purpose in the world.”

Now Here Are the 3 Secrets to Becoming Wildly Popular

1.  Feel with your heart, be empathic, be kind

Someone who is cold and nasty isn’t going to attract many people. Most people want to associate with people that make them feel alive and happy. Feel with your heart, understand the feelings of others, listen to them and be kind; you’ll attract many people.

“The great gift of human beings is that we have the power of empathy.”
-Meryl Streep

“The level of our success is limited only by our imagination and no act of kindness, however small, is ever wasted.”
-Aesop

It sounds so simple, but it can be easy to forget especially when you’re bombarded with “popular” people constantly in the media when sadly, they seem to be in so much turmoil. Being popular isn’t about how many national magazine covers or newspaper people are spread over; it’s about feeling a sense of well-being with yourself and with the ones you love. Be honest with yourself and take the goodness you have within you, and you’ll shine. You’ll sparkle and many people will want to surround you.

3.  Stay alert and alive, dive into the unexpected

This is my favorite secret (okay, friendly reminder). It’s so easy to get stuck in the same mundane routine. Every day it’s the same ole’ thing. It doesn’t need to be boring. Sure, you have work, maybe kids and daily responsibilities to contend with, but think about the things you love and begin incorporating those things into your lifestyle. Is there something you always wanted to try but it was never the right time. Well, maybe now’s the time. Write a list of things you would love to accomplish; professionally and personally and begin tackling them. Try something different and new; try the unexpected. You can meet new people, become excited about life and it’s possible to be that magnet where people want to gather around.

Meryl Streep is right. Study the world “feelingly, with empathy.”

Feeling with passion and a warm heart, being humble and kind and diving into new adventures will make you popular where it counts most–with YOU and the one the ones you love.

What are your secrets (friendly reminders) to being wildly popular?