From the Front Lines 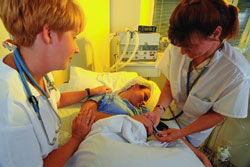 As nurses we tend to focus on treating a patient’s illness and still show compassion.

As a nurse I try to feel the surroundings.  I try to sense not only what a patient is going through, but what the family goes through.  And yes, I need to avoid being so intertwined with a patient that it becomes emotionally overwhelming.

The key is to separate the two so the boiling of emotional turmoil doesn’t wreak havoc on your life.  It’s not easy, but it is possible.

Not long ago I was paged by a nurse from the surgical intensive care unit.  He wanted me to come to the unit. He said the daughter of a patient was out of control–not physically, but she was insistent and demanded to know what exactly was going to be done for her father.  She was loud, angry and rude to the staff.

I got to the unit straight away.

I introduced myself the family members–the daughter and her mother, the patient’s wife.  The mother, an elderly woman, sat in a wheel chair.

I asked if I could speak with them away from other patients and they agreed.  We went into one of the offices nearby.

Before the daughter could say a word, I sensed her agony.  It had been a long wait in the ER and she and her mother have been dealing with an ill father and husband for quite some time.  As I looked into the daughter’s eye I couldn’t help but feel for her.

I know what it’s like being a family member in a hospital.   I remember when my loved one was ill. The waiting and the not-knowing is emotionally draining.  A minute waiting can feel like hours.  The pain seems to eat you up.

I sat a long time with the daughter and her mother; I just listened.  There was a daughter and a mother who were falling apart inside and feeling grief.

The daughter explained that after months of her father being in and out of hospitals, he had finally been getting better until he fell at home, and then it was back to the ER.

And now the family was back in the hospital and in their agony again.

While the daughter was being a patient advocate, her pain and grief led her to speak to the staff in a hostile manner they were not prepared for.

They simply wanted someone to listen, to feel their pain.