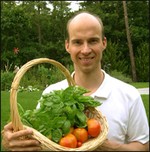 Fall is the perfect time of year to enjoy wonderful fruit and vegetables from the farm. As the days grow cooler the fall harvest arrives with apples, pears, squash, pumpkins, cabbage, broccoli and Brussels sprouts at farm stands in the countryside and farmer’s markets in the city.

The bright orange of a pumpkin and the distinctive aroma of an apple give us the chance to reconnect with the land. This was the time for celebrating the harvest, and the tradition continues with thanksgiving celebrations in many countries in October and November.

We found inspiration in the fall harvest for recipes in The Fat Resistance Diet such as Asian Coleslaw, Baked Apple with Cinnamon and Walnuts, and Cinnamon Lemon Poached Pears with Cherry Syrup (Recipe Below). The beautiful bright colors of the fall fruit and vegetables contain carotenoids and flavonoids. Our diet was created to fight inflammation, so we chose the ingredients to maximize inflammation-fighting components such as these.

This is a delightful fruit dessert with layers of incredible flavor. Cooking the pears with the cherry concentrate is great way to create a sweet syrup without sugar. We never use artificial sweeteners in our recipes or meal plans, because studies show that artificial sweeteners actually interfere with the body’s ability to regulate caloric intake.

Tablespoon Cherry Concentrate
Peel and core pears. Put pear, water, cherry concentrate, lemon juice and cinnamon in a saucepan. Cover and simmer for 7-10 minutes or until fork tender. With a slotted spoon remove and plate pears. Simmer liquid until syrup is reduced to desired consistency and spoon on pears. Top with chopped almonds and mint. Serves two.

Aromatic spices such as cinnamon and cloves are a classic combination with the fall harvest fruit and vegetables, and we use these spices in our book for their flavor and health benefits.

Jonathan Galland is a health writer for newspapers, magazines and major news websites. He is frequently interviewed as a weight loss and health expert on the radio and has appeared on Martha Stewart Living Radio. His work has been featured on the cover of Fitness, Glamour, and Women’s World and in publications such as The Washington Post, Body and Soul, Self and The Wall Street Journal. Jonathan is co-author of The Fat Resistance Diet, with his father Leo Galland M.D. Their book has been translated and published in Italy as La Dieta Galland and in Japan as Dr. Galland’s Metabolic Diet.

Dr. Leo Galland is a board-certified internist who received his education at Harvard University and the New York University School of Medicine. He has held faculty positions at New York University, Rockefeller University, the State University of New York, and the University of Connecticut. Interviews with Dr. Galland and articles about his work have been featured in Newsweek, Reader’s Digest, Self, Bazaar, Men’s Fitness, The New York Times, The Washington Post, and many other publications. He has written three highly acclaimed popular books, The Fat Resistance Diet, Power Healing, and Superimmunity for Kids.
Further information about adopting a healthy lifestyle is available at www.fatresistancediet.com.
Copyright © 2007 Renaissance Workshops Ltd. Used by permission.