Celebrity Chef Jon Ashton Will Add Flavor and Fun to Your Day! Learn how to Cook Stress-Free, Nutritious Meals!

We lighten things up a bit! Tune in on Friday, August 10th from 5:30pm to 6:00pm EST. Celebrity Chef; Jon Ashton will add flavor and fun to your day! Jon will join Barbara Ficarra, Host/Producer of Health in 30™ to talk about his love for cooking and Jon will share his healthy recipes! 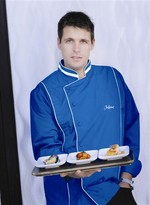 “My name is Jon Ashton, and I have had the pleasure and privilege of doing what I love best in life, cook. My journey has been profoundly impacted by this thirsty passion, taking me on an ever changing culinary ride.

Though I was trained as a chef and have worked with and been inspired by some of the world’s top chefs, I’d prefer to do away with the label and simply be known as Jon. You will see that I don’t use fancy food terms. Food is food. It’s calm like the sound of a mother’s voice, and effortless like the silent dialogue between couples in love. It’s as comforting as your favorite pair of faded jeans. Food is expressive like Van Gogh’s masterpieces and unadulterated like a child’s laugh. Fully naked, it is simple, provocative and needs no pretense. Until now, our world has taken food, in its purest form, for granted. Food evokes emotions and it connects us in more ways than one realizes. Fancy exploring the emotional side of food with me.”

Chef Jon Ashton began his story in the cold, gray port city of Liverpool, which earned its spot on the world map thanks to the Beatles. As a young lad, he learned about the joy of cooking through his grandmother’s warm, cottage kitchen.

Creating recipes with Granny Ashton opened the door to home economic classes at school where Jon became further intrigued by the art. Although schoolmates bullied him for being one of the few boys in class, he persisted and quickly realized cooking was his passion. Soon after, Jon won first-place in an all-county cooking competition. This milestone achievement for young Jon gave him momentum to pursue his love of cooking in college.

In 1994 Jon graduated from St. Helens College in Great Britain and worked in several noted restaurants including the Derby Lodge Hotel’s French restaurant and as Sous Chef at The Kirkfield Hotel’s restaurant. Jon’s success and flair in the kitchen soon gave way to appearances on British cooking shows including the nationally syndicated “TV Dinners” where audiences fell in love with his wit, charisma and genuine love of food. Soon, America discovered him and Jon was featured in publications from New York to California. America was calling and Jon knew he had to answer. So, with $2,000 in his pocket he left everything he knew and traveled to America, eventually landing in Florida.

Jon quickly began producing and starring in his own local access TV show, which aired in Disney’s town of Celebration. Soon after, Jon took a position as the regular mid-day chef at Orlando’s FOX affiliate station and found himself appearing on “The Tonight Show with Jay Leno” a short year later. His telegenic persona earned him an invitation to cook on the TODAY Show with Al Roker. He is currently the resident Chef of CW’s nationally syndicated The Daily Buzz, as well as a regular guest Chef on NBC’s iVillage Live.

No matter what Jon does he remembers his grandmother’s wise words; to share with others.? Jon loves working with kids and is committed to improving the eating lifestyle of young people in America. It’s his way of thanking America for opening their doors to him.