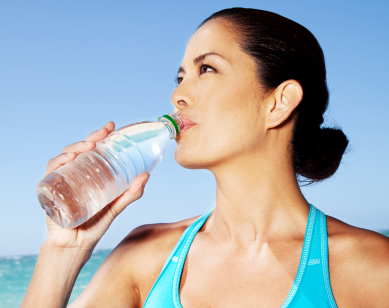 Information circulating about the dangers of plastic containers has created fear and confusion.

Recently, I interacted in a live health chat on MedHelp about the safety of plastics.  Scientist, Joe Schwarcz, PhD, Director of McGill University’s Office for Science and Society talked about “The Real Truth About Plastics: What you should and shouldn’t worry about.”

While Dr. Schwarcz states that some plastics like Tupperware and Rubbermaid are safe to use, there are other plastics made of Bisphenol A (BPA) that may cause some concern, however he did not become alarmed.

There is extensive information on the safety of plastics, and reading some of it can easily cause panic and confusion, but the smartest step health consumers can do for themselves is to remain calm and don’t become alarmed.  Gather the facts and determine what’s best for you.

The Facts About Bisphenol A (BPA)

Bisphenol A (BPA) is used to manufacture polycarbonate plastics. This type of plastic is used to make some types of beverage containers, compact disks, plastic dinnerware, impact-resistant safety equipment, automobile parts, and toys. BPA epoxy resins are used in the protective linings of food cans, in dental sealants, and in other products.  General exposure to BPA at low levels comes from eating food or drinking water stored in containers that have BPA. Small children may be exposed by hand-to-mouth and direct oral (mouth) contact with materials containing BPA. Dental treatment with BPA-containing sealants also results in short-term exposure. In addition, workers who manufacture products that contain BPA can be exposed.

How does BPA get into the body?

BPA can leach into food from the epoxy resin lining of cans and from consumer products such as polycarbonate tableware, food storage containers, water bottles, and baby bottles. Additional traces of BPA can leach out of these products when they are heated at high temperatures.

During the Live Chat

An audience member during the live chat asked about the safety of plastics that contain chemicals that mimic estrogen that may result in developing breast, uterine, or ovarian cancers; Dr. Schwarcz replied that these plastics contain BPA and phthalates and that they are estrogenic.  He states, however that we are “exposed to estrogenic compounds all over the place.  Soy contains isoflavones which are estrogenic, so do chickpeas, and of course milk!  Natural estrogens in milk are thousands of time more potent estrogens than BPA.”

Dr. Schwarcz writes about Bisphenol A in his blog Chemically Speaking.

“The more bisphenol A is in the news, the more acrimonious and self-serving the debates seem to get.  On one side we have some scientists stirring the pot with statements like “The science is clear and the findings are not just scary, they are horrific.  When you feed a baby out of a clear, hard plastic bottle, it’s like giving the baby a birth control pill.”  This is absurd.  The science isn’t clear, it’s quite murky.  If it were all clear, we wouldn’t be having such bitter debates.”

On the other hand, the BPA defenders, mostly with industrial connections, claim that BPA has been safely used for fifty years and presents no risk to humans.  This is a hollow claim.  True, nobody has ever experienced an acute reaction from traces of BPA leached out of a polycarbonate bottle, but that is not the kind of risk we’re worried about.  The concern is over the possibility of subtle effects that may turn up after long term exposure to minute amounts of BPA, or health problems that may be manifested in the distant future if exposure occurs at a crucial stage of development.  Such concerns are legitimate and are based upon suggestive, but certainly not conclusive, evidence.”

“An international panel of experts concluded that food is by far the main source of bisphenol A (BPA) exposure and that other sources are of minor relevance. The experts were also able to model circulating levels of BPA in the human body, which are very low, indicating that BPA is not accumulated in the body and is rapidly eliminated.” – The World Health Organization (WHO), 2010

But, according to the U.S. Food and Drug Administration (FDA), In January 2010, the FDA announced it shares the perspective of the National Toxicology Program (NTP) that recent studies provide reason for some concern about the potential effects of BPA on the brain, behavior, and prostate gland of fetuses, infants, and children.  “The NTP has minimal concern for effects on the mammary gland and an earlier age for puberty for females in fetuses, infants, and children at current human exposures to bisphenol A.”

“FDA also recognizes substantial uncertainties with respect to the overall interpretation of these studies and their potential implications for human health effects of BPA exposure.  These uncertainties relate to issues such as the routes of exposure employed, the lack of consistency among some of the measured endpoints or results between studies, the relevance of some animal models to human health, differences in the metabolism (and detoxification) of and responses to BPA both at different ages and in different species, and limited or absent dose response information for some studies.

FDA is pursuing additional studies to address the uncertainties in the findings, seeking public input and input from other expert agencies, and supporting a shift to a more robust regulatory framework for oversight of BPA to be able to respond quickly, if necessary, to protect the public.”

Information from the live chat provided by Dr. Schwarcz and audience questions appear below.  You can read the full health chat on the safety of plastics on Medhelp.

(The live chat dialogue has been edited for grammar and spelling, content remained unchanged.)

“The Real Truth About Plastics: What you should and shouldn’t worry about”

Are plastics safe to store food?  Is there a difference between the containers bought in a dollar store as opposed to higher price plastic containers?

There are many types of plastic containers.  The ones sold for storage like Tupperware and Rubbermaid (I have no association with either of those companies) are great, they are made of polyethylene or polypropylene.  I wouldn’t, however, heat up tomato sauce in an old margarine tub because that has only been tested for margarine storage.  As a general rule though for use in the microwave, oven glass or ceramic are the best.

Some vegetables come in those microwave bags–are they safe to use? What about storing food in Ziploc bags? I do that all the time. Am I exposing myself to BPA?

Not a molecule of BPA in sight.  These are made of polyethylene, the same as the shopping bags, hula hoops etc.

Is it safer to use plastic or glass bottles for a newborn?  I hear conflicting reports, and as a new mom, I’m paranoid.

Dr. Schwarcz talks about the “precautionary principle” where using a replacement that is less risky is good option like in the case of baby bottles.  Glass bottles are available and it is a good alternative to plastic ones.  He also says that using “glass or ceramic” are the best in the microwave.  He did not say to stop drinking out of water bottles and buy only BPA free products either.  He did say in his live chat, that plastics that mimic estrogen contain BPA.  He further adds that we are “exposed to estrogenic compounds all over the place,” milk, soy, chickpeas are some examples of these compounds.  “Natural estrogens in milk are thousands of time more potent estrogens than BPA,” he stated during the live chat.  While there is no clear conclusive evidence that BPA is 100 percent detrimental to your health, there is a report from the FDA in conjunction with the National Toxicology Program (NTP) that recent studies provide reason for some concern about the potential effects of BPA on the brain, behavior, and prostate gland of fetuses, infants, and children.  The NTP has minimal concern for effects on the mammary gland and an earlier age for puberty for females in fetuses, infants, and children at current human exposures to bisphenol A.

What can you do to prevent exposure to BPA?

If you are concerned, you can make personal choices to reduce exposure:

You are smart health consumers.  You can decide what’s best for you.

Centers for Disease Control and Prevention

As always, thank you for your time.