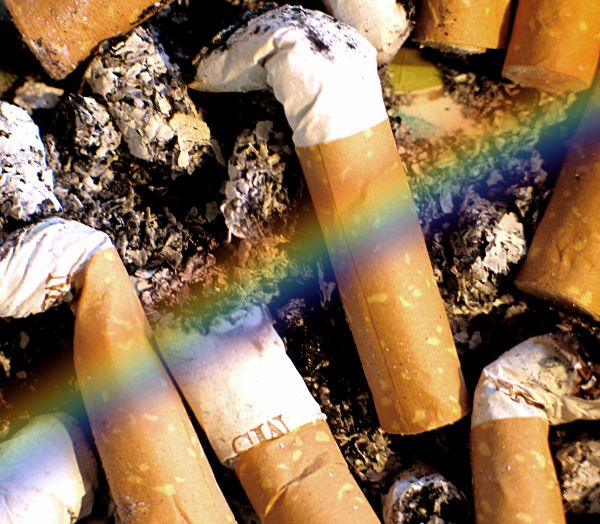 Some people think that a rainbow means hope and a new beginning.

For those people who already smoked their first cigarette and are now addicted, there is hope to live a healthier life.

If smokers are successful in quitting, they may see hope at the end of their rainbow.

Hope in the form of living a healthier life and breathing easier.

The truth is that most people who are addicted to smoking need help to quit. There are smoking cessation programs to help smokers quit, but unfortunately many people are not getting the help they need because many health insurance plans don’t cover the necessary treatments.

States are failing when it comes to smoking cessation programs

Most states are severely lacking when it comes to providing comprehensive services to those people addicted to nicotine.

According to a recent report from the American Lung Association, State Cessation Coverage 2009 Helping Smokers Quit, “tobacco dependence is a medical condition just like any other addiction, and its treatment should be covered by insurance plans.”

Most people know that smoking is bad for their health, and they would like to quit, but “only about 4% to 7% of people are able to quit smoking on any given attempt without medicines or other help.”

Why is quitting “cold-turkey” so difficult?

In the same report from the American Lung Association,  it’s reported that many people need help quitting because going “cold turkey” doesn’t work.

Carl R. Sullivan, M.D., Director of Addictions Programs at the WVU School of Medicine, Department of Behavioral Medicine and Psychiatry, and Professor and Vice-Chairman and Residency Training Director, explains:

“Nicotine is a powerfully reinforcing drug and once the brain becomes dependent on nicotine’s presence it is extremely difficult to stop using. Nicotine causes a surge of dopamine…..the brain’s reward, “feel-good” chemical to be released with every puff. And each puff changes the brain very slightly making it likely that another hit of nicotine will occur. Nicotine addiction is not a “Habit”, rather it is a powerful, insidious brain disease and just stopping is not an option for many, many people. The addiction demands to be fed. Most people who do quit have made many attempts at stopping before becoming successful. For every person who says “I just put them down” a further examination will reveal multiple previous attempts and a period of time in which the symptoms of nicotine withdrawal were difficult to manage.”

What are the approved FDA tobacco cessation treatments?

The FDA has approved seven medicines for smoking cessation. There are a lot of smoking gimmicks out there, says Dr. Sullivan, “but only the following seven have been subjected to the rigors of well designed clinical trials and have been shown to be both safe and effective.” The approved tobacco cessation treatments are:

Tobacco kills more than 400,000 people each year in America, and these are preventable deaths.  Comprehensive coverage requires providing easy access to the seven cessation medications and three forms of counseling recommended to treat nicotine addiction by the U.S. Department of Health and Human Services (HHS) and the Centers for Disease Control and Prevention.

West Virginia is one state where comprehensive coverage is lacking and “West Virginia is not following all of these guidelines for those on Medicaid-and that’s costing all of us, said Dr. Sullivan.”  He added, “The American Lung Association recently gave our state a failing grade when it comes to tobacco prevention and spending, and the state’s Medicaid program does not provide coverage for all the drugs that help people quit smoking, and it does not provide coverage for individual counseling.  Additionally, there are restrictions on the coverage that is provided.”

Most states like West Virginia are doing a poor job in helping smokers get the help they need.

How you can help

You can let Congress know that smoking cessation programs are necessary and vital for the health and well-being of people.

“I am writing to urge you to fight to include wellness and prevention measures as part of health care reform.   Providing smokers with help quitting will not only save lives, but it will also save money.  Smoking-attributable diseases account for $96 billion in health care expenses in this country every year.

Addiction to nicotine is a medical condition, and there are treatments like medications and counseling that have been proven to help more smokers quit.  According to the American Lung Association’s new report, Helping Smokers Quit: State Cessation Coverage, most smokers do not have access to all the treatments that can help them quit.  Now is the time to change this – health care reform is an important opportunity for you to make sure all smokers have the best chance possible to quit.

The U.S. Public Health Service recommends seven medications and three forms of counseling as proven treatments for tobacco cessation.  All State Medicaid programs should be required to cover ALL of these treatments as well as any other public health care program.  These treatments should also be part of the standard, required benefits package for all private health care plans.

Please work to ensure that health care reform legislation includes wellness and prevention measures, including coverage of tobacco cessation treatments for all smokers. We all share the financial burden of tobacco use in the U.S., and we all will benefit when more smokers are able to quit.  It is time to address this problem now as part of the health care reform.”

____
The lack of comprehensive coverage by most states will leave those people with a medical condition without hope.

The good news is…there is hope for smokers.  There is treatment available that can help save their lives.  Maybe at the end of their rainbow, they are tobacco free and living a healthier and happier life.

[Full Disclosure:  Carl R. Sullivan, MD was involved in clinical trials at WVU for the nicotine nasal spray, nicotine inhaler, buproprion and verenicline, and he is a consultant for Pfizer and Chantix.  The American Lung Association’s State Cessation Coverage 2009 Helping Smokers Quit report that was referenced in this post was funded in part by Pfizer.]

Talk to your doctor and health care professionals about treatment options.  Work together to find out what’s best for you.  Remember to always ask questions and be in charge of your health.  Always make sure you understand exactly what’s involved in your treatment.

We would love to hear from you.  Are you a smoker?  Have you tried quitting “cold turkey”? Were you successful?  Have you used any of the 7 recommended FDA tobacco cessation treatments?  How did you quit smoking?  What advice do you give to those people who smoke who desperately want to quit?  How would you help them?

Thanks so much for you time.

For more info on smoking