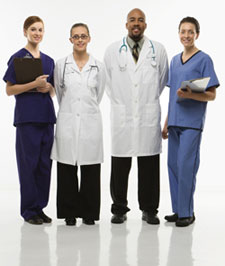 Dr. Pho references a Canadian newspaper where it’s reported that “Many of the doctors in training said they had learned the procedure from watching medical dramas. And a subsequent analysis of the show ER revealed its fictional MDs and nurses performed intubations incorrectly almost every time.”

Medical dramas on television are for entertainment purposes.  They are not educational training tools for doctors and nurses.  Doctors and nurses should know better than that.  These dramas are the last place they should look to for in-service training on procedures.

On the other hand, we feel because it’s a medical show, it should be accurate–not as a teaching device, but as a depiction of medical care. Otherwise, what is the message that is being sent to the general public?

I remember meeting Neal Bear, MD, former ER writer and producer, years ago at the Freddie Awards. I had a long conversation with him about ER.  As a nurse I couldn’t understand why the role of the nurse wasn’t portrayed more accurately and of course he assured me there were nursing professionals involved in producing the show.

Even though we know that medical dramas are for entertainment purposes, I believe they can still be accurate and informative to the public–not only about doctors and nurses, but about the procedures they use.

TV provides a great opportunity to educate the public. I’d hate to see it lost simply in the name of a story line.